'Inequality for All' by Robert Reich

Just watched this Movie - a MUST SEE - I am a MAJOR fan of Robert Reich  (www.robertreich.org) and soooo agree with this Movie - I learned sooo much - I hope everyone watches this Movie - Please spread the word. (Now on Netflix, iTunes, and DVD.) BTW: Even though I know you are enjoying your much needed vacay - missing my Randi Rhodes Randi Rhodes -sweet dreams!! oxox 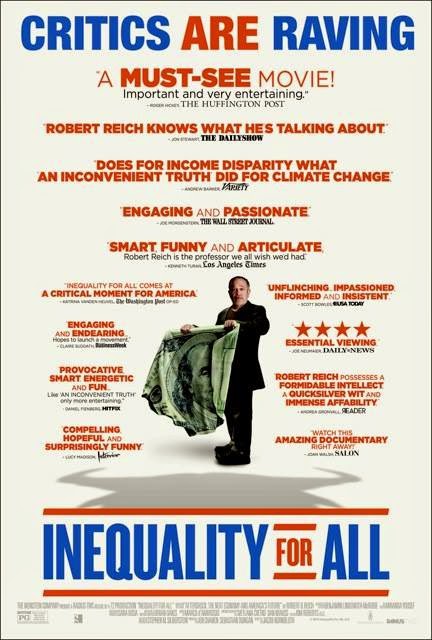 www.robertreich.org
Posted by Stacy Burke at 8:53 AM No comments:

Well, after today I will be off the air…gone, disappeared... Gee, I wonder if CNN is going to search for me. I should make some ping sounds during my last show so that CNN can try and trace the path of the pings to figure out where I am. I want the search for me to go on long enough that Don Lemon attributes my disappearance to supernatural causes.

I'm sorry that I'm leaving before those militia nuts in Bunkerville, Nevada leave the Bundy ranch. Maybe I should stick around until they leave. Oh that's right - they're never going to leave. The craziest domestic terrorists in the United States are all sitting in the middle of nowhere, defending the cows of a complete moron. If the FBI had had a plan to bottle them all up, they could hardly have done any better.

I'm also leaving before Donald Sterling - and he's being pushed. The guy is in his 80's. Why does he even want to continue to run the L.A. Clippers? Hasn't he seen enough losses in his life already? By the time a person is in their 80's, they have all experienced many losses. But if you're in your 80's and you've owned the Los Angeles Clippers for 33 years, then you have endured more losses than any person on earth.

I'm also sorry to be leaving before the Republicans sort this whole Benghazi thing out. I'd like to stick around until they do, but I doubt that any of us is going to live that long. The Republicans won't stop with the Benghazi investigations. What exactly do they think they're going to find? Benghazi has been examined more thoroughly than the Zapruder film. Darrell Issa is never going to give up the hunt for the smoking gun in Benghazi. He's like Captain Ahab hunting for Moby Dick...except of course that Moby Dick existed.

So Donald Sterling is digging in to fight to stay for the long haul, the crazies in Bunkerville are already dug in, CNN is never going to let go of the airplane, and the Republicans will be investigating Benghazi forever - and still blaming the Clintons for whatever is going on then. I get the feeling I could come back in 20 years, and nothing will have changed.

In closing, just promise me that you'll remember to vote. Voting doesn't guarantee winning, but not voting guarantees losing. So vote - I'll know if you did or not by whether or not there's an impeachment trial going on in the Senate next year.

For the fans. Love you - all ways.

Randi`s LAST Homework - Mama bird has left the Nest - Now it is our Turn to Share her teachings - we have done the Homework - Now the Test!


Randi Rhodes interviews Oliver North from The Baron on Myspace.
Posted by Stacy Burke at 8:29 AM No comments:

Randi Rhodes: Same as it Ever Was

All these years, and some things are still the same as they've ever been.

Meanwhile, the GOP Civl War keeps going. The Tea Party is now trying to take down Eric Cantor. Cantor is Jewish, and he's being treated just like Israel is treated by the rightwing extremists: They'll only allow him to exist for as long as he serves their purposes. Cantor's Tea Party challenger is named David Brat. It's rare that a name is that appropriate, or Eric Cantor's name would be Eric Schmuck.

They still keep sticking their feet in their mouths too. Tucker Carlson did just this week! Carlson said "All of us should be happy about one thing, and it's that for the first time in human history you have a country whose poor people are fat." Great! They won't die of starvation - they'll all just die of heart disease. That takes longer, right?

And yes - they still want a theocracy on the right, too. Ben Sasse - the Tea Party nutjob - won the Republican primary in deep red Nebraska, which makes him a virtual lock to win the Senate seat. Sasse declared after winning this week, "Government cannot force citizens to violate their religious beliefs under any circumstances." So after the 2014 elections, America will have a Senator that believes Christians are legally entitled to stone gay people to death. Or to be more accurate, America will have another Senator who believes that.

Even while the right has remained wrong, Randi's still tried to educate her listeners, year after year. Listener Bob from Phoenix, back in Septmber of 2013, was insistant that Randi was wrong about the debt - and it was all President Obama's fault. Not only was Randi right, but as Steve Benen showed just this week, the Federal budget deficit is now on track for a six-year low. These are called facts, Bob. Good luck, listeners - folks lik

Posted by Stacy Burke at 5:40 PM No comments:

CNN has released more of their interview with Donald Sterling. If CNN is looking for something to replace the Malaysian plane story, Donald Sterling is even more lost than that airplane! In the interview, Sterling apologizes - and then continuously slams Magic Johnson. Amazing! For Donald Sterling, it’s like one step forward, two steps back...and then shoot yourself in the foot.

Sterling ridiculed Magic Johnson in an interview with Anderson Cooper, asking "what does he (Johnson) do for the black people?" Well, for starters Donald, he doesn’t call them "the black people." Donald, before you call somebody out, you might want to run a quick Wikipedia search on them. Magic Johnson has been honored numerous times for his philanthropic work in the black community and for people suffering from HIV/AIDS. Attacking him for not helping people is like attacking the Koch brothers for not hurting people. Every time you hear this Sterling jerk, remind yourself that Republican economic policies are all designed to let billionaires like this avoid taxes and get even richer.

Meanwhile, back in the tin foil hat brigade, Limbaugh is saying that the reason Hillary Clinton didn’t label Boko Haram a terrorist organization is that "they look like African Americans." Amazing - Rush has managed to say something about Boko Haram that’s almost as offensive as Boko Haram itself.

How offensive is Boko Haram? Even Al Qaeda has condemned Boko Haram for their kidnappings of schoolgirls. When even Al Qaeda says you've gone too far? That's saying something - and it isn't anything good. If Rush keeps up his trash talk, maybe Al Qaeda will condemn him. Everyone else worthwhile has already has.

Speaking of human garbage piles that should be condemned, Karl Rove opened his mouth again - and unsurprisingly, garbage came out. Rove said this week that Hillary Clinton may have brain damage. Hey Karl - if I want half-assed diagnoses of medical conditions from a Republican ideologue, I’ll stick with Bill Frist. And "brain damage" is not an accusation that Republicans should really be throwing around. I have a quick list of two-word rebuttals: "Louie Gohmert." "Sarah Palin." And don't forget "Rush Limbaugh."

Since Stephen Colbert annouced he's taking over for Dave Letterman next year? His team has been on fire - and they certainly were on Monday night. If you missed it? Watch it now.

Posted by Stacy Burke at 3:40 PM No comments:

They will Never Change by Randi Rhodes

One last week, people! So buckle in, and prepare for..? More of the same right-wing BS. Because they never really change who they are.

L.A. Clippers owner Donald Sterling has a new excuse about why he made those racist comments on a phone call to his mistress. It all boils down to a variation on Marion Berry's "bitch set me up." Donald Sterling is aware that Marion Barry is black, right? In a classic moment, Sterling said of his mistress "I don't know why the girl had me say those things." Donald, that doesn't show that you're not a racist - it shows that you're a racist AND a horrible boyfriend. It's not a good idea to make excuses about your comments about minorities by blaming women.

Meanwhile, Senator Marco Rubio said in an interview that he thinks he's ready to be President of the United States - and that there is nothing we can do about climate change. OK, he didn't say he's ready to be a GOOD President of the United States. That's quite a range of sentiments, Marco. "Yes, I am qualified to lead this country. And no, there's no place to really lead it. I would appreciate your vote."

In positive news, Michael Sam became the first openly gay player to be drafted by an NFL team this weekend, after being picked by the St. Louis Rams. After Sam got picked, he gave his boyfriend a big kiss in front of the cameras. Of course, the draft was being followed by all of the sports networks. Oddly, none of them chose to do a slow motion replay of that historic kiss.

You may have missed this last Friday, even if you were watching "Real Time With Bill Maher" on HBO, since the video below only happened on "Overtime". Dinesh D'Souza - a perfect example of a selfish right-wing extremist nutjob (who may soon be going to prison) if ever there was one - tried to blast out the self-centered tea party/libertarian line on the minimum wage, how it isn't really a big deal. Sister Simone Campbell, stomped him flat, and hit D'Sousa from both the right AND the left on how the modern Republican Party is all wrong about business and the minimum wage