"Stop whining and get over it. It's been almost a week!" say the same folks still upset about a war that ended more than 150 years ago.

let ALL the cockroaches crawl out - I want to know who and where they are - they have always been here - fuming - fermenting - the Only way we can rid us of these evil creatures - is let them think they won - let them expose themselves - hopefully they will burn as soon as the fly too close to the Sun!!

#THISISWHYIMARCH for the many reasons as stated - but speaking for myself - NOW for the 1st time #Trump has a Boss, as in Boss, I mean America --- and for 1st time #Trump has a female Boss, I mean Lady Liberty --- Trump is for the 1st time Ever Under # #ParentalGuidance --- I want #Trump to see us protesting and realize this - realize that he is now President for ALL of Us - NOT JUST President to his Supporters --- we have to keep nipping at his ankles -- his Achilles (greek mythology) ---- to make sure America stays on the progressive path to justice and greatness that we hold dear. As for the #Trumpets --- the cockroaches are exposed - they have always been here --- I am glad that the lights are on and we know who and where these cockroaches are --- we Now know where to step ---- all I can say -- I hope they fly so close to sun so that the wax melts off their wings and they crash down to reality ------ keep up the fight my brothers and sisters --- #FistUp

I personally know a anti-Obama person - she would always say how arrogant Obama was - well - now with her #Projection - has helped to elect the most arrogant person ever to be President -- Trump acts as if he is more important than America -- he will protect his legacy before America - America is his human shield  --- this Hamilton play protest proves it --- so much time spent on many tweets about the #Harassment and #Bully on Pence at play - but NOT ONE tweet addressing the #Harassment & #Bully on our fellow Americans --- again ---Trump sees himself more important than the people of America﻿
Posted by Stacy Burke at 8:03 PM No comments:

What is Racism - how to deal with it

What l learned today from #SuperSoulSunday: Racism = not dealing with your own fear, pain and ignorance - easier to deflect it, blame it on others so you do not have to deal with your own truth - maybe best way to handle these people is with empathy - love them - for they might be the ones that need it the most.

Posted by Stacy Burke at 2:48 PM No comments:

Posted by Stacy Burke at 7:00 PM No comments: 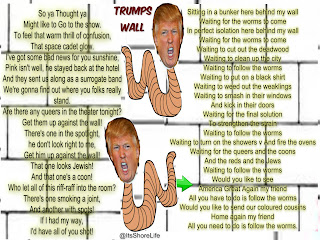 Posted by Stacy Burke at 6:49 PM No comments:

2 hrs ·
We have met the enemy and he is us. --Pogo
In "Letters from the Earth" Mark Twain wrote the following:
"Man is a Religious Animal. He is the only Religious Animal. He is the only animal that has the True Religion--several of them. He is the only animal that loves his neighbor as himself and cuts his throat if his theology isn't straight. He has made a graveyard of the globe in trying his honest best to smooth his brother's path to happiness and heaven."
Today's atrocity in Belgium highlights Twain's wisdom and prescience. A group of religious zealots strapped on some explosives this morning, and, in the rush hours at the airport and a metro station, detonated themselves, killing at least 30 and injuring 230 more. Paris, 9/11, Beirut, and the many other bloody incidents over the past two decades certainly could be called the opening shots in a religious war. We have reacted in kind, invading Afghanistan and Iraq, overthrowing Gaddafi, getting drawn into Syria, thinking that we can, with force, pound an extreme sect of a religion into quiet submission. But humans possess a serious flaw in their brain wiring: the necessity to fight over religious belief systems. As Twain says, we are the only member of the animal kingdom to do so. The Crusaders indulged in it for nearly 400 years, and nothing much changed except borders and body counts. It only gained a lot of real estate for the crusaders. The fighting over religion then and now is made all the more vicious by a blind faith on both sides that sees only its point of view as right and holy. I see no indication that this flaw can be recognized, repaired, or even understood. It is as involuntary as the patellar reflex, a deadly knee jerk to take the life of someone seen as a "non-believer." As ISIS and Al Qaeda spawn new extremists bent on martyrdom, OUR Christian zealots instinctively react with more killing. The right-wing douches in this year's campaign will be howling for more invasions after today--never mind that, sorry folks, but they won't be sending THEIR kids into the fighting. Before you know it, we'll have another 400-year religious blood bath, and this one will make the so-called Holy Crusades look like a county fair. Believe me, this is not pessimism. This is my recognition of the harsh reality that the veneer of civilization, culture, and refinement is very thin. Despite our iPhones and Ikeas, our Hubble telescopes and United Nations, our symphonies and artificial intelligence, we have not progressed past the 11th century.
Here's one last quote I particularly like: Queen Eleanor of Aquitaine, from "The Lion in Winter." She is speaking to her sons, who are fighting over succession to the throne of England held by her aging husband, Henry II:
"...Oh, my piglets, we are the origins of war: not history's forces, nor the times, nor justice, nor the lack of it, nor causes, nor religions, nor ideas, nor kinds of government, nor any other thing. We are the killers. We breed wars. We carry it like syphilis inside."
Peace. mxo