President Barack Obama made a comment at an appearance in Roanoke, Va., that Mitt Romney and other Republicans say denigrated businesspeople. The comment starts around 33:15.

Mitt Romney and other Republicans have pounced on a line from President Barack Obama that they say denigrates people who create and build businesses.

Here are the relevant excerpts of the speech Obama gave in Roanoke, Va.:

"If you were successful, somebody along the line gave you some help. There was a great teacher somewhere in your life. Somebody helped to create this unbelievable American system that we have that allowed you to thrive. Somebody invested in roads and bridges. If you’ve got a business -- you didn’t build that. Somebody else made that happen. The Internet didn’t get invented on its own. Government research created the Internet so that all the companies could make money off the Internet.

"The point is, is that when we succeed, we succeed because of our individual initiative, but also because we do things together. There are some things, just like fighting fires, we don’t do on our own. I mean, imagine if everybody had their own fire service. That would be a hard way to organize fighting fires.

"So we say to ourselves, ever since the founding of this country, you know what, there are some things we do better together. That’s how we funded the G.I. Bill. That’s how we created the middle class. That’s how we built the Golden Gate Bridge or the Hoover Dam. That’s how we invented the Internet. That’s how we sent a man to the moon. We rise or fall together as one nation and as one people, and that’s the reason I’m running for President -- because I still believe in that idea. You’re not on your own, we’re in this together."

Posted by Stacy Burke at 7:39 PM No comments:

We cannot afford health care but we can afford hundreds of millions each year in subsidies to oil companies? Thanks to www.groobiecat.com for the great picture. 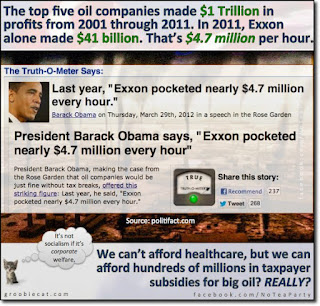 Written by Samuel Warde | July 13, 2012 | 4
Right wingers would like to make us believe that Obama is Un-American, Anti-Christian and worse.  Those of us who know the facts, understand otherwise. Below, we have exposed 8 right-wing myths attacking Obama for what they are – complete falsehoods.
Myth 1: The Obamas demanded and spent more money than any first family to move into the White House.
Fact: The Obamas paid for the renovations of the private living quarters in the White House with their own money rather than using the funds provided to all new first families.
Myth 2: The Obamas are Muslims (or atheists) who do not allow Christmas to be celebrated in the White House.
Fact: The Obamas are Christian and celebrate Christmas in a very traditional way during each holiday season at the White House. They also recognized celebrations and customs from other religions. What was different about the Christmas celebration was that the Obamas reused many Christmas ornaments from previous White House trees rather than buy new ones and used LED energy-saving lights.
Myth 3: Obama received extra money as part of his Nobel Peace award and he pocketed it all.
Fact: Obama received the same award as other Nobel laureates, but donated the award money for the prize to several charities.
Myth 4: Obama has been secretive and unwilling to allow public or media access.
Fact:  In only his first year in office, Obama held 23 town hall meetings, gave 158 interviews, and held 42 press/news conferences, as well as 411 speeches, comments, and remarks. * Note: Official numbers are not available on such things, but this seems to be a new record high in the White House.
Myth 5: Obama vacations more than any president.
Fact: In his first year in office, Obama took only 26 days of vacation (2009) * Note: Official numbers are not readily available on such things, but this seems to be a new record low and far lower than Bush
Myth 6: Obama was not born in America and is some sort of international “Manchurian” plant who supports other countries over America.
Fact:  Obama was born in Hawaii in 1961. He has been an internationalist president insofar as he took 10 foreign trips to 21 nations and met with 74 foreign leaders in only his first year in office (he also took 46 out-of-town trips to 58 cities and 30 states his first year in office).
Myth 7: Obama has not kept any of his campaign promises.
Fact: Official numbers are not kept on such things historically, but it appears Obama made more promises and discussed more policy issues during his campaign than any other presidential candidate. But, it also appears he has kept more promises than perhaps any other president. (As of 10/4/11) Obama has kept 147 of his campaign promises and another 197 of them are currently in progress; but he has broken 49 of them and compromised with Republicans on 44 of them; another 69 of his campaign promises have been stalled by Republicans. (Source: PolitiFact)
Myth 8: Obama is Anti-Reagan.
Fact: Obama promoted the celebration of the Reagan Centennial and established the Ronald Reagan Centennial Commission (June 2, 2009) 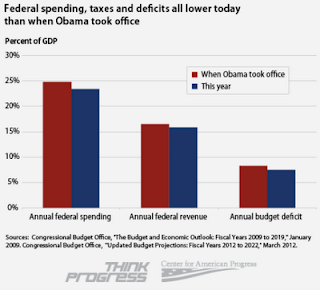 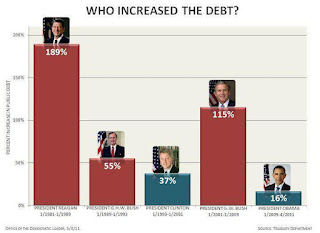 Posted by Stacy Burke at 9:01 PM No comments:

I want you to read this quote from Mitt Romney:

“What the President is proposing is therefore a massive tax increase on job creators and on small business.  Small businesses are overwhelmingly being taxed not at a corporate rate, but at the individual tax rate. So successful small businesses will see their taxes go up dramatically and that will kill jobs.”

And I want you to square that with REALITY.  President Obama’s tax plan will raise taxes on 3.5% of small business tax filers.  Now … you may ask yourself … if only 3.5% of small businesses were impacted by the plan – why would Republicans be so up in arms about it?  It’s because of LARGE CORPORATIONS and billionaires that want to avoid being taxed what is already a small rate relative to the average American.
Most people do not understand that the average worker pays 50% more in taxes than someone making $200 million a year.  Don’t believe me – read THIS.
Republicans have perfected this little bait and switch approach for YEARS.  They tout their commitment to “protecting small business” and then what they actually do … is pass large tax cuts for corporations and really rich people.  THAT is the deal.  After all – it’s those corporations and billionaires that are helping fund those 3rd party attack ads … it’s those corporations who are donating hundreds of millions to defeat political opponents.
In other words – what Mitt Romney and the rest of the Republican party is parroting a lie to protect their wealthy donors.
Jared Bernstein – chief Economist at the Center on Budget and Policy Priorities writes HERE:

“The upper-income cuts return $850 billion over 10 years to the Treasury, simply by reverting to the top rates under Clinton, when the wealthy fared perfectly well, the budget balanced, and growth was much stronger and more broadly shared than in the Bush years.  The fact that these upper-income increases hit only the top 2% — and that’s considering both households and small businesses — is also important.  They won’t hurt the wobbly recovery, as these folks are not income constrained in the first place.”

In its latest estimate last month, Congress’s nonpartisan Joint Committee on Taxation found that in 2013, just 3.5 percent of small business tax filers would pay a higher rate — about 940,000 individuals, many of whom are lawyers and doctors in partnerships. But those few percent account for 53 percent of all small business income.
GOP aides accept those facts but they say those few small businesses are the ones overseeing growing companies whom the nation is counting on to hire. According to a variety of analyses, the lion’s share of the tax hike would be absorbed by Americans earning well over $1 million.
Late in 2010, when the same debate played out, William Gale, co-director of the nonpartisan Tax Policy Center, called it a “myth” to suggest that ending the tax cut on top marginal rates would hurt small businesses.

As we’ve shown HERE – corporate profits are at an all time high:

As the Economist wrote HERE – lobbying politicians by corporations brings an investment on return “comparable to the returns of the most blistering hedge fund.”  In other words – you scratch my back … I’ll scratch yours.  You get on your knees … I’ll give you some cash.
And you’ll often hear this laughable claim that American corporations have the 2nd highest tax rate in the world!!!  Oh my god – run for cover and vote Republican.  But what does reality look like?  The only thing that matters when it comes to taxes is the EFFECTIVE tax rate – not the marginal tax rate.  America has a MARGINAL tax rate that is 2nd highest in the world … but after corporations take advantage of deductions etc – this is how America’s ACTUAL tax rates i.e. effective tax rates stack up against other major countries (source):

And over time – this is what how much corporations are paying year to year.  Notice – the burden on corporations keeps going DOWN.  Remember – every $$$ a corporation doesn’t pay because of a special loophole equals a $$$ that you have to pay or a pot hole we can’t fix or a water line that doesn’t get repaired or a free lunch that we don’t give some kid at school.  Every $$$ a corporation doesn’t have to pay in taxes is a $$$ that goes directly to a shareholder and we know that 57% of all capital gains go to the 1%. (source)

Here are a few facts you may want to familiarize yourself with:
One more excellent example of just how unequal the tax code is by industry.


But the basic takeaway is that there are plenty of industries that are benefiting from the current corporate tax code, and are likely to fight like hell to preserve the breaks they’re currently getting. Moreover, as Appelbaum notes, a lot of these industries are the sympathetic ones: “High-tech industries pay relatively little in taxes. Utilities and other infrastructure providers pay some of the highest rates.