Well, the verdict is in—and Trayvon Martin has been found guilty. And every black teenager in America has now been implicated for the same crime that he was executed for. That’s justice Florida-style—the lawyers for the defense managed to get a conviction of the victim. After this verdict, I actually agree with one thing that George Zimmerman said—These punks! They always get away!

Zimmerman’s legal team portrayed a murdered teenager as a dangerous thug in order to get his killer off. There is no defense for that kind of defense. This was the murder case equivalent of defending a rapist by attacking the rape victim as being the one responsible for what happened. Heck, they even brought in the old “what was she wearing” way of blaming the victim. Trayvon was wearing a hoodie—he was asking for it!

Mark O’Mara says that George Zimmerman would not have been charged if he was black. So in O’Mara’s mind, his legal expertise saved George Zimmerman from a justice system that is biased in favor of black people! Don West said “The prosecution of George Zimmerman was a disgrace.” Yes, but only in the sense that it didn’t result in a conviction. West said “I am thrilled that this jury kept this tragedy from becoming a travesty.” No, they only made it a worse tragedy. You’re the one who pushed it into travesty territory with that comment. Prosecutors may not have been able to convince the jurors that George Zimmerman had a “depraved mind” when he shot Trayvon, but Zimmerman’s lawyers seem to have clearly depraved minds.

George Zimmerman’s brother Robert went on TV to say he wants to know what makes people “attack someone the way Trayvon Martin did”! Robert! The lies and slanders worked. They got your brother off. You don’t have to keep repeating them. I guess if you start attacking somebody after they’re dead, it’s hard to figure out exactly when to stop.

Now that he’s been acquitted, George Zimmerman will get his gun back. I’m sure he’ll be more pleased than ever with it. After all, now he knows that it “works.” There are only two reasons they make guns like the one George Zimmerman carries—to make a little man feel big, and to kill other people. This gun proved it works like a charm for both of those purposes.

George Zimmerman may have been acquitted, but this may not be over. Hopefully he will be pursued through the legal system with the same obsessive tenacity that he pursued Trayvon with. The Department of Justice can still charge Zimmerman with violating Trayvon’s civil rights by killing him. That may be necessary, since just killing him doesn’t seem to be a crime in Florida.
Today’s Homework | Discuss | Blog Archive

Melissa Harris-Perry: “I live in a country that makes me wish my sons away...”


Visit NBCNews.com for breaking news, world news, and news about the economy
Posted by Stacy Burke at 8:49 AM No comments:

My thoughts on the Guilty Zimmerman

Help! What's the proper procedure when you're followed by a random armed nutbag returning home from getting candy & iced tea?

l guess if l walk thru an alley in Florida and a guy comes at me with a gun and l fight him off - he can shoot me and claim self-defense!

Wait.....what??? Isn`t this what got us here in the 1st place??  To bad his brother didn`t follow this advice. 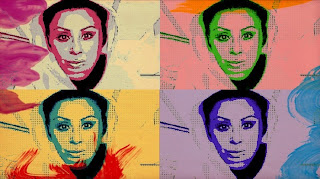 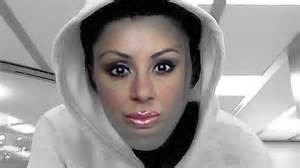 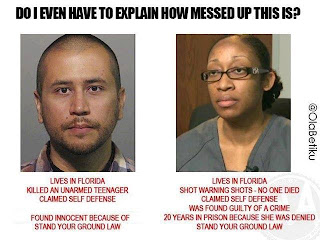 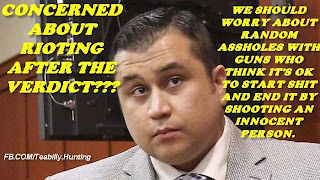 Posted by Stacy Burke at 8:46 AM No comments: