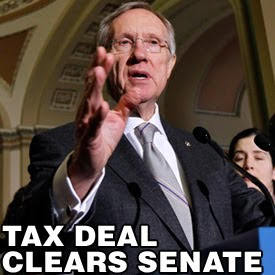 EARLIER: The tax deal has passed in the Senate 81-19 (roll call of the vote)

Republicans always seem to be crying. Is all this crying sincere, or are these Republicans just in the pocket of the Kleenex lobby? They even cry on the floor of Congress. Every time Mitch McConnell takes to the floor, a Capitol Hill janitor goes to fetch a bucket and mop. Republicans have done more maudlin crying on the floor than David Hasselhoff. At least John Boehner wasn’t fumbling around with a cheeseburger.

Amidst the tears, the tax deal is slowly moving forward. The liberal Democrats in Congress who are so upset about the tax deal are the same ones who punted responsibility for doing something about it months ago. But then everybody puts off their taxes, don’t they? Congressional Democrats waited until their tax situation hit a deadline and then scrambled to do a half-assed job of it. Now Congress is going to end up trying to mail this off just before midnight on the day it’s due. I hope the Post Office stays open.

Conservative pundits, activists, and potential presidential candidates have lined up against this deal. They’re standing on the sidelines… and trying to trip up this bill like they’re a conditioning coach for the New York Jets. There’s a lot wrong with this deal. Still, conservatives have managed to object only to everything that’s right about it. Guys, sometimes you just have to take the good with the bad… even if you really hate the good.

Today President Obama is meeting with some 20 CEO’s of American businesses. Obama is going to try and get these fat cats to invest some of the money they’ve been sitting on. It’s going to be like that A&E show “Hoarders” where they try and get some crazy lady to part with one of her 2,000 dolls. Our economy is being run by people with the same mentality as the people on “Hoarders” who have a house full of knick-knacks covered in rat feces. And you know what’s going to happen. At the bottom of the huge piles of cash, they’re going to find a bunch of cat skeletons.