Randi Rhodes: Time to Vote OUT the Party of NO! 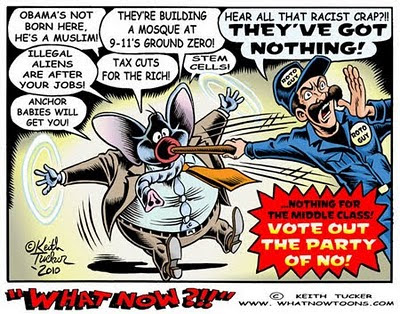 Primary results from last night are in. We still don’t know what’s going on in Alaska, but that’s true in general all the time. In Arizona, John McCain won… and all it cost him was John McCain. He beat JD Hayworth by becoming JD Hayworth. John McCain is a man who wanted to keep his job more than he wanted to keep the qualities that qualified him for his job. One Arizona voter who went for McCain said “I don’t like either of them, but I used to hear JD Hayworth on the radio and he annoyed me.” Wow. Please, JD, go back to the radio. It’s one way to ensure you’ll never hold elective office again. In Florida, the Republican nomination for governor was won by Rick Scott. Or was purchased by Rick Scott. Rick Scott is the closest thing possible to actually having the health insurance industry itself run for office. And I’m sure that’s coming in the wake of the Citizens’ United ruling. Last night New York Mayor Michael Bloomberg offered another passionate defense of the proposed mosque and community center. The Mayor was hosting the annual Ramadan Iftar dinner at his official residence in Gracie Mansion. Gee, maybe he should have checked with the rightwing to make sure Gracie Mansion isn’t too close to Ground Zero for a Ramadan dinner to take place there. But then Gracie Mansion is up around 88th Street. As long as it’s above 59th Street, I guess it’s OK with Newt Gingrich. Some Tea Party people are starting to wonder if Glenn Beck is just using them to promote himself. News to the Tea Party—Glenn Beck didn’t get to be Glenn Beck by concentrating his efforts on anything besides Glenn Beck. Given the things the Tea Party wants to do, I’m actually more than happy to see their energies siphoned off to glorify Glenn Beck. It’s better than doing away with Social Security. A new study says that Adolph Hitler may have had Jewish or African roots. Given Hitler’s racial attitudes, I think he would take the news that he might be Jewish very badly. It would be like telling Glenn Beck he may be descended from open-minded progressives. Today’s Homework Discuss


Thom's blog
Shoot to Kill...Americans?
Frontline, The New Orleans Times-Picayune and ProPublica are reporting that in the jumbled days after Hurricane Katrina an order circulated allowing the New Orleans police to shoot looters, according to present and former members of the department. Some officers who were aware of the order say they refused to carry it out. Some viewed it as fundamental change on the use of deadly force, which only allow police to fire in protect themselves or others from clear physical threat. The accounts of orders to "shoot looters," "take back the city," or "do what you have to do" are fragmentary and it remains unclear who originated them. So far, no officers implicated in shootings have used the order as an explanation. What is clear is that when local government was wiped out, and state government was paralyzed, by a massive hurricane, the "authority of last resort" - the federal government - was ignoring the horrors while President George W Bush first went to a birthday party in Arizona and then a country music concert in California. By the time Bush's advisers finally sat him down and forced him to watch a DVD of news coverage they had assembled, 4 days of horror had passed and almost 2000 American citizens were dead. During this first nightmare week the mostly black citizens of New Orleans hit hardest by the flooding received from all levels of government neglect and bullets rather than food, water and shelter.