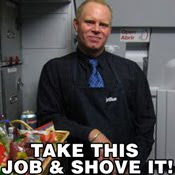 He’s mad as hell and he’s not going to take it any more! He will, however, take a couple of those beers, thank you very much. If you haven’t heard, a JetBlue flight attendant exited a plane and his job by deploying the parked plane’s inflatable emergency slide after an altercation with an unruly passenger. After the passenger cursed him out, flight attendant Steven Slater announced he was quitting over the plane’s PA system, grabbed a couple of beers, deployed the emergency slide, and slid down it into folk immortality. Now Slater is becoming a hero, with several Facebook pages devoted to him already. As working class folk-heroes go, he’s not exactly Joe Hill, but you take what you can get. Still, I don’t think it would make a very convincing Woody Guthrie song. Before sliding away, Slater got on the plane’s PA and said “To the passenger who just called me a motherf---er, f--- you. I’ve been in this business 28 years, and I’ve had it.” So close! It would have been absolutely perfect if he had added “And thank you for flying with JetBlue.” A lot of us wish we could do what Steven Slater did. Especially the part about grabbing the beers. It’s nice to go out with a bang. And it’s even better to go out with a bang and a beer. Columnist Joanna Molloy said “it’s part of the frustration all over the country as employees take pay cuts and have to do double the workload as they take on the responsibilities of their laid-off co-workers.” In other words, a lot of us are one incident away from “deploying the slide.”
For a look at what awaits those who manage to stick it out at their jobs, the latest boogey man for conservatives are public employees with decent pensions. That’s right. The right wing wants you to believe that all your problems are due to elderly ex-firefighters. They’re worse than anchor babies! At least they’re giving us a choice of scapegoats. Get real. Retired public employees aren’t getting more than they deserve. They’re just getting what everybody deserves. The right won’t be happy until all public employees are treated as badly as most private employees. They don’t want a firefighter treated any better than a fast-food worker. Personally, I don’t want the person putting out the fire at my house to be as beaten-down and dispirited as the person preparing my burger and fries. We have a lot to do to give justice to the American worker. As a start, I suggest that every job should provide an inflatable slide exi t for employees who just can’t take it any more.>>> MORE