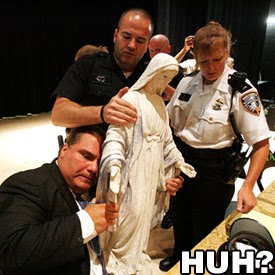 If you’re tired of seeing candidates like Florida’s Rick Scott who make you want to cry, here’s someone who will make you laugh, at least at first. There’s a guy running for mayor of Providence, Rhode Island named Chris Young (pictured left, clinging to the Virgin Mary) who is providing Youtube with the best video since Basil Marceaux came out of nowhere. During a live debate, Chris asked his girlfriend to marry him. It’s not clear if Chris sprang that one on his girlfriend, but she’s his campaign manager. So if she didn’t know, she’s not doing her job. In any case, the marriage proposal has been the closest to normal Chris Young has been in this campaign. During a TV interview, Chris serenaded his interviewer with a song that sounded kind of like Gordon Lightfoot after a severe blow to the head. What I want to know, Chris, is where do you stand on the question of the gold-fringed flag?
On a more serious note, here’s a site with some great videos of the 1963 March on Washington. You might learn a little. And if you’re Glenn Beck, you might learn a lot. You might want to spend tomorrow watching these videos so you don’t have to waste time with Glenn Beck’s rally. And I’m sending that advice out to Glenn Beck too.
Bruce Majors, the Tea Party blogger who warned people coming for Glenn Beck’s rally that 80 percent of Washington DC is dangerous is speaking out. I assume he’s doing it from a safe location. Majors claims his directions weren’t racist. Really? The only way the could have been more racist is if they warned visitors about cannibals and headhunters. Major’s guide to DC is like a 2010 guide to the city for people who are living in 1955. I guess his warning that most waitresses and cab drivers “are immigrants, frequently from east Africa or Arab countries” was just an advisory for visitors who don’t speak Somali or Swahili.
Finally, Sarah Palin’s daughter Bristol Palin seems poised to appear on the next season of Dancing with the Stars. I don’t know. Do we really want someone taking part in a dance contest who named their child “Tripp”? Not a good omen.
Today’s Homework Discuss
Posted by Stacy Burke at 12:53 PM