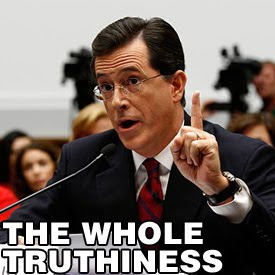 It’s Friday, ya bastids!
Everyone’s a comedian—even some people who don’t intend to be. Among the intentionally funny, Stephen Colbert testified in front of Congress today (video below). He was playing a character, like a lot of people who testify before Congress. But this was performance, not perjury. Colbert testified about the conditions facing America’s undocumented farm laborers. He spent a day packing corn as part of a challenge from the United Farm Workers. It gave Colbert a chance to see what farm workers do, and to do a “corn-packing” joke in front of a Congressional committee. The hardest part for Stephen Colbert was to play enough of a rightwing lunatic to differentiate himself from the real rightwing lunatics. Representative Steve King of Iowa actually said to Colbert today that American workers “would prefer the aroma of fresh dirt to that of the sewage of American elitists who disparage them even as they flush.” Wow. It’s impossible to tell who the satirist is. Stephen Colbert makes a mockery of rightwingers by pretending to be one. Steve King makes a mockery of rightwingers by actually being one.
Meanwhile, The Daily Show pointed out that there wasn’t anything new in the Republicans’ “Pledge to America” yesterday (video). Nothing has been re-thought. Hell, nothing has even been rephrased. Even high school kids who lift a Wikipedia article for an assignment go through and change some of the wording. The clips show Republicans repeating the same things verbatim that they’ve been saying for decades. The only difference is that videotape back in the 90’s was a lot grainier. If Republicans were this into recycling all the time, we would be the most environmentally conscious nation on earth.
Finally, in a case of comic ineptitude, rightwing media reported yesterday that the Israeli delegation boycotted President Obama’s speech at the UN. In fact, the Israeli delegation was absent because they were observing the Jewish holiday Sukkot. Video showing the empty seats of the Israeli delegation and was posted on Real Clear Politics. Evidently the folks at Real Clear Politics aren’t real clear on the Jewish calendar. Blogger Jim Hoft posted a headline that yelled “BREAKING: ISRAELI DELEGATION SKIPS OBAMA’S UN SPEECH.” Sorry Jim, that’s not breaking news. That’s breaking the most basic rules of news reporting. But then I guess you were going for laughs, not facts.
Today’s Homework Discuss

Thom's blog
Shrink the Government by Raising Taxes
When we have unfunded tax cuts, taxpayers get government services - from parks to schools to welfare and expanded unemployment payments - at a lower cost than they did before the tax cuts. And, like with anything else, lower cost translates into more demand. Former libertarian CATO Institute chairman William A. Niskanen discovered the tipping point: whenever taxes are below 19 percent of GDP, government grows in size and spending (usually military, but others as well) like a fat man at a pie-eating contest. As Atlantic Monthly writer Jonathan Rauch noted, "the way to limit the growth of government is to force politicians, and therefore voters, to pay for all the government they use - not to give them a discount." And that means raising taxes to a point above 19 percent of GDP.
Read more in chapter two of Rebooting the American Dream, "Roll Back The Reagan Tax Cuts!".
Each day you can find more about how to reboot the American dream, one chapter per week, usually in the right hand column of the newsletter.
http://ThomHartmann.com
Posted by Stacy Burke at 2:29 PM