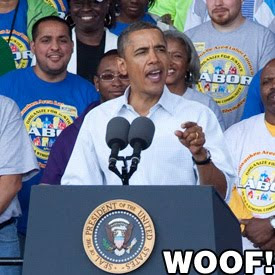 Well I hope everybody had a nice Labor Day off. Of course, that’s only possible if you’ve had any days on recently, and a lot of us haven’t. You don’t really celebrate Labor Day when you don’t have a job. At that point, Labor Day just basically serves to remind you that you’re not working. As Robert Reich points out in an excellent column, this is the worst Labor Day in the memory of most Americans. And I’m including that year you got sick from the potato salad. When the unemployment rate is up around 10 percent, and organized labor is down to about 7 percent of the private work force, Labor Day stops being a celebration of labor, and more like a memoriam for labor. Labor Day is quickly becoming a day that we pause to remember all the jobs we lost.
Not that the President isn’t doing his best to change that. This Labor Day, President Obama called for a long-term jobs program to rebuild our nation’s infrastructure. We need jobs, and we need this work done. It makes such perfect sense that you know Republicans will oppose it. It would help the economy, it would help the country… it would help everything except Republican electoral hopes in November. This is exactly what this country needs… a year and a half ago. Oh well, better the Democratic plan, which is late, than the Republican plan, which is never. The program would rebuild America’s roads, rail lines, and runways. Refurbishing our transportation systems—what better way to get America moving again? The plan would rebuild 150,000 miles of roads. Next to that, any Republican alternatives just look like so much bad road. And that is basically the Republican alternative—unemployment and pot-holes. The White House proposes to raise the money for the program by eliminating tax breaks and subsidies for the oil and gas industry. As though the mere prospect of job creation wasn’t enough to get Republicans to oppose it! Republicans will support a plan to create jobs by getting rid of subsidies for big oil when they support a plan to pay for gay weddings by taxing assault rifles.
During the speech, Obama said his opponents “talk about me like a dog” (video below). True enough. I half expected to see Mitch McConnell or John Boehner threatening Obama with a rolled up newspaper. Well, with this Labor Day speech, this dog is finally starting to show some bark. I hope he’s got some bite before Election Day comes around.
Today’s Homework Discuss