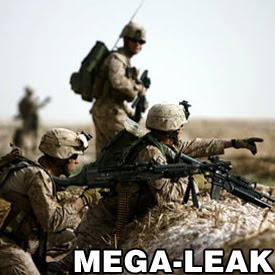 A leak of over 90,000 military documents on the war in Afghanistan paints a grim picture of the situation there. The sheer number of documents paints a grim picture. 92,000 documents? This is the biggest leak in the world not directly caused by BP. If we’ve done nothing else, with this much paperwork we’ve certainly managed to deforest a good chunk of the planet. These reports are a better defoliant than Agent Orange.
On Fox News Sunday, Newt Gingrich was asked if he was irresponsible to call Shirley Sherrod “viciously racist.” Newt blamed his reaction to the Sherrod clip on the “Obama administration’s continuing incompetence.” This is what it’s come to—now Newt Gingrich is blaming Obama for Newt Gingrich. Howard Dean called what Fox News did with the Shirley Sherrod story “absolutely racist.” He also said “The Tea Party called out their racist fringe and I think the Republican Party's got to stop appealing to its racist fringe.” Let’s be straight here: the Tea Party does not call out its “racist fringe.” It calls out its racist mainstream.
The Wall Street Journal reports that BP chief Tony Hayward is on his way out. It’s about time. If George Steinbrenner had been in charge, Tony Hayward would have been fired a dozen times by now. When Hayward took over in 2007, he pledged to clean up BP’s poor safety record. I’ll give him this much—he certainly made their record prior to his tenure look a lot better, at least in comparison. After this the safety record of the Titanic looks pretty clean. The BP board will meet today to consider Hayward ’s departure. Goodbye, Tony. Try not to track any oil on your way out. I don’t know what Tony will do now. The man hasn’t done anything right. He should probably apply to be a fact checker for Glenn Beck. Finally, a study shows that the John Roberts Supreme Court is the most rightwing Supreme Court in living memory… unless there’s someone out there old enough to remember the Roger Taney Supreme Court. How conservative is the John Roberts Supreme Court? If these 9 people were a baseball team, at least 5 of them would be in right field. And that is not a winning lineup.>>> MORE
Posted by Stacy Burke at 4:05 PM