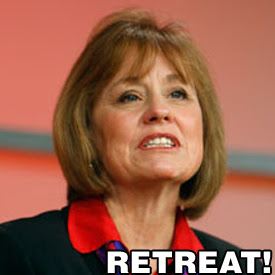 It’s Friday, ya bastids!
There’s some great video of Tea Party candidate Sharron Angle running away from reporters’ questions—at her own news conference (see below). What the hell is wrong with Sharron Angle? Don’t worry, Sharron—it’s a hypothetical question. You don’t have to answer it. I’ve heard of politicians running, but this is absurd. Sharron Angle shouldn’t be running in a Senate race, she should be running in the 1500 meter hurdles. Heck, I think she would have beaten most of the field in an Olympic steeplechase. Why don’t they just add some hurdles and a water hazard to Sharron Angle’s press conferences?
My God, even Alvin Greene, the surprise Democratic Senate candidate from South Carolina, answers reporters’ questions. He tends to stare ahead into space for a long time before doing it, but he does it. There may be trouble for Alvin, though. Greene’s military records say he has an inability to clearly express his thoughts. Wow. I think you just described the ideal politician. After all, what is hurting Sharron Angle more than the fact the she has clearly expressed her thoughts in the past? The military records say Greene has trouble performing basic tasks. Hey, I think he’s going to fit right in the Senate! On one of his military reviews, Greene’s incompetence was deemed so great that he was considered “a threat to others.” Yes, but more of a threat to others than Jim DeMint? That’s the question in this election.
On his TV show, Glenn Beck said he would never have aired the edited clip of Shirley Sherrod—although he actually aired it earlier that same day on his radio show. Glenn Beck, meet Glenn Beck. If you have any standards, you’re not going to like him. Radio Glenn Beck said flat out that they “have video tape of a USDA administration official discriminating against white farmers.” Then TV Glenn Beck said he would never say that. I can’t wait until Book Author Glenn Beck weighs in and breaks the tie. Finally, Norm Coleman is reportedly thinking about challenging Michael Steele for the RNC chairmanship. There’s definitely a big opening at the RNC. Unfortunately for Michael Steele, that big opening is his mouth. Hey, if Norm Coleman can do for Republicans what he did for Norm Coleman in 2008, Democrats should be in pretty good shape. Today’s Homework