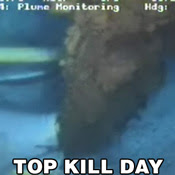 Caving to public outrage, BP agrees to webcast the “top kill” attempt to stop the leak. The operation began at 2pm ET. Watch it here, here or here.Outrage of a different stripe is in order when it comes to the cozy relationship between government regulators and Big Oil. From porn, meth and job interviews, to the 500 million dollar grant given to the current Energy Secretary’s former lab.And let the outrage continue… BP’s chairman to US critics: remember, we are “big and important”. Watch BP’s CEO barking orders at a cameraman. As a savvy caller pointed out a few days ago, BP has a very real financial interest in low-balling the amount spilled, as they could be fined up to $4,300 per barrel. Hiding the evidence of how big the spill may also be one of the driving forces behind BP’s use of hundreds of thousands of gallons of toxic dispersant. That same dispersant is creating a toxic soup underwater, breaking the oil into droplets capable of passing into the flesh of fish and birds ( video). An internal BP memo shows a “3 Little Pigs” cost/benefit analysis used to save cash at the expense of worker safety. And like Greg Palast told us weeks ago, BP was unprepared for the Exxon Valdez spill (which was their responsibility) just as they were unprepared in the Gulf.>>> MORE

For more Randi content, be sure to check out her Daily Homework
Click to listen to today's audio comedy bit!
Posted by Stacy Burke at 10:15 PM