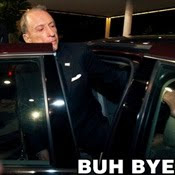 Establishment candidates go down in flames in Pennsylvania and Kentucky ; Arlen Specter loses and Rand Paul wins. And in what could be viewed as a victory for progressives and labor, Sen. Blanche Lincoln has been forced into a June 8 runoff in Arkansas .
In the PA race that actually pitted a Democrat and against a Republican, and was considered a bellwether for the November midterms, Dem. Mark Critz wins easily, keeping John Murtha’s district blue despite it voting for McCain in 2008.Republican Rep. Mark Souder of Indiana ’s affair with a staffer ( resignation video) is just the latest in a long list of scandals involving the 1994 “Contract for America ” class of Republicans. And in a bitter twist of irony, Souder is seen here being “interviewed” by his mistress/staffer on abstinence-only education.
A scandal of a different stripe has emerged for Democrat Richard Blumenthal in Connecticut . While the conventional wisdom is that Blumenthal will survive the fallout over misleading people into believing that he fought in Vietnam, the question is should he?>>> MORE
Unbelievable!An Alabama teacher has been investigated by the Secret Service after using the hypothetical shooting of President Obama to "teach" geometry.
For more Randi content, be sure to check out her Daily Homework
Click to listen to today's audio comedy bit!
Posted by Stacy Burke at 5:24 PM