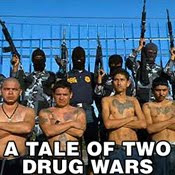 With so much of the outrage over immigration centered on drug trafficking-related violence, we’ve decided to take a look at both Mexico’s and our own War on Drugs…Are U.S. pot laws the root cause of Mexican drug violence? Mexico’s drug cartels receive 61% of their funding from trafficking marijuana. American guns arm the thugs, as Mexico has some of the toughest gun laws on the planet, but cracking down on gun sellers north of the border has proved to be a frustrating endeavor. For example, one Arizona gun dealer was charged with selling hundreds of firearms (mostly AK-47’s) to smugglers – all charges were dismissed in March.And it’s not just American guns and pot laws fueling this madness – American teens also get seduced by the cash and perks that the cartels have to offer.Legalize to save lives - when the numbers are crunched, America ’s drug war is actually deadlier than Mexico’s. Despite decades of probation and trillions spent on the War of Drugs, Americans use more drugs than any other nation. And the highest rates of homicide in US coincide with prohibition ( see item #13).>>> MORE

Heckuva Hit-Job, BrownieWho the hell wants to know what disgraced former FEMA director Michael Brown has to say about anything? Silly question when FOX News has time to fill. Brownie actually said that the spill in the Gulf is exactly what Obama wanted ( video). White House press secretary Robert Gibbs wasn't too happy about it ( video).


For more Randi content, be sure to check out her Daily Homework Click to listen to today's audio comedy bit!
Posted by Stacy Burke at 9:35 PM