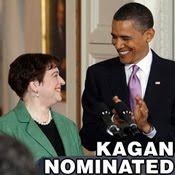 Reminder: Do not forget to scroll ALL the way down to bottom of page to read Thom Hartmann`s Newsletter for Monday 10th 2010)

President Obama has nominated Elena Kagan for the US Supreme Court.When she went through the conformation process to become Solicitor General, Kagan was widely considered fairly moderate. As Solicitor General, Kagan lost her first Supreme Case – Citizens’ United – raising questions of her inexperience… questions that will surely be raised again and again in the coming weeks.Until recently, Elena Kagan’s most public fight was banning military recruiters from the campus of Harvard Law on the grounds that Don’t Ask, Don’t Tell was discriminatory. Kagan also has some former ties to Goldman Sachs that you can bet we’ll hear about – likely in a very exaggerated manner.Bill Clinton nominated Kagan back in 1999 to the US Court of Appeals, but Republicans blocked her nomination from making it to a confirmation vote. In 2003, now Supreme Court Chief Justice, John Roberts got that very seat instead.Why liberals should be concerned about Kagan’s nomination. MoreWhy liberals should give her a chance. More

That Didn't Take LongElena Kagan has never publicly commented on her sexuality. For some, that's not only as good as admitting that's she a lesbian, but by being lesbian she's also not qualified to sit on the bench. Geez...


For more Randi content, be sure to check out her Daily Homework Click to listen to today's audio comedy bit!
Posted by Stacy Burke at 5:26 PM