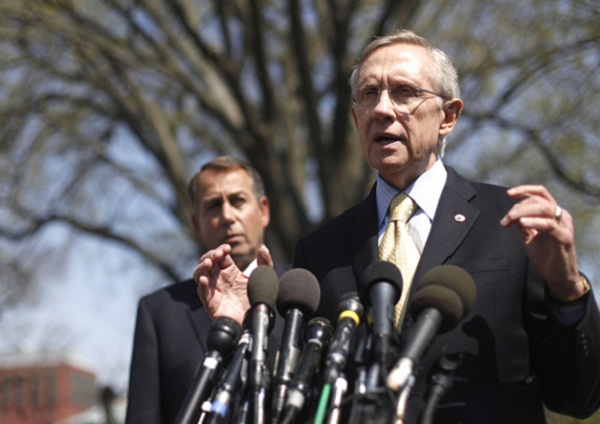 Thanks to the House GOP's decision to add a policy "rider" defunding women's health services provider Planned Parenthood to the budget and Democrats' pushback, abortion has taken center stage in this week's government shutdown battle.

Democrats say a rider to "defund" Planned Parenthood--a national health care provider that also offers abortion services--is a prominent reason why Democrats and Republicans have failed to reach an agreement on how to fund the government past Friday's midnight deadline.

"Now the tea party--among others, but they're the biggest push--is trying to move its extreme social agenda, issues that have nothing to do with funding the government," Senate Majority Leader Harry Reid (D-Nev.) said Friday on the Senate floor. "They're willing, it appears--clearly, to throw women under the bus even if it means they'll shut down the government. Because that's where we are. That's the one issue that was remaining last night."

Federal law prohibits federal funds from being used to pay for abortions, so Planned Parenthood's abortion services are paid for by private funding. But Republicans, including House Speaker John Boehner (R-Ohio), have made defunding the organization a priority in the budget battle, seeing it as an opportune time to push their social issue agenda.

Abortion is seen as a political third rail--it's an issue so charged, that any politician who ventures to touch it will be harmed. The exception is social conservatives, whose base largely supports abortion restrictions. The current shutdown battle provides a perfect opportunity for social conservatives--with Congress under pressure to agree on a budget before the midnight deadline, all lawmakers are now being forced to address the Planned Parenthood rider, whether or not it's politically safe.

Social conservatives in Washington, and "pro-life" advocates specifically, have long invoked abortion as a political stalling tactic. In late 2009, Rep. Bart Stupak (D-Mich.) offered an amendment to the president's health care bill to bar federal funds from being used for health insurance that covers elective abortions. The measure, known as the Stupak Amendment, threatened to derail the entire bill.

Ultimately, the Stupak language was dropped and the president's health care law passed, with Stupak's support.

Democrats in Congress have said they will not bend on the proposed rider, especially since federal law already dictates that federal funds cannot be used for abortions.

The GOP-controlled House already voted this year to defund Planned Parenthood, but enough Senate Democrats vowed to oppose that legislation that it had no hope of success in the Democratic-controlled upper chamber.

In the current fight, Democrats have cast the Planned Parenthood rider as a war on women's health. Reid noted Friday on the Senate floor that Planned Parenthood provides cancer screenings, as well as a range of health services such as cervical cancer tests, breast exams and birth control.

"The Republicans want to shut down our nation's government because they want to make it harder for women to get the health services they need," Reid said. Reid claimed Friday morning that Democrats and Republicans have reached an agreement on "cuts and savings," saying riders were the only sticking points remaining.

Both sides are preemptively casting blame for a shutdown.

Boehner said in a brief press conference Friday morning that Democrats have not agreed to cut spending to the degree that would satisfy the GOP. Washington is "not serious about dealing with its spending addiction," Boehner said.

After emerging from a meeting with the House GOP conference later Friday, Boehner reiterated: "Most of the policy issues have been dealt with and the big fight is about spending."