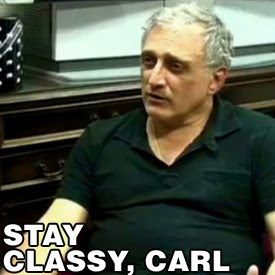 It’s Friday, ya bastids!
More conservatives behaving badly: New York governor-wannabe Carl Paladino, who threatened to “take out” a reporter, is defending his anger. Unfortunately, he’s doing it rather angrily. If angry people made the best leaders, we’d have President Mel Gibson and Speaker of the House Christian Bale. Really, what is the appeal in a candidate who is always irate? We want someone who will solve problems, not yell about them. What are you going to do about unemployment, Carl? Throw a folding chair across the room? How do you expect to control spending when you can’t even control yourself? Carl Paladino is truly frightening. If he loses this election, I think the state of New York should look into getting a restraining order against him.
Among conservative corporate “persons,” Fox News is being sued by the Equal Employment Opportunity Commission over allegations of age and gender discrimination. Here’s the shocking part—it has nothing to do with Bill O’Reilly. The EEOC says Fox retaliated against reporter Catherine Herridge after she complained about age and gender discrimination against her. Age discrimination? Why does Fox News discriminate against older reporters? The average age of Fox’s viewers is 110. Anybody looks young to Fox News viewers. Herridge had also complained that at Fox News “female and black correspondents were given less desirable shifts.” I’m shocked! Who knew that Fox News has black correspondents? The only time I see black people on Fox News, they’re in Black Panther uniforms outside of a polling place. I hope Fox News handles these charges with velvet gloves… or at least with a loofah mitt.
Meanwhile, News Corp, the corporate parent of Fox News, has donated $1 million to the US Chamber of Commerce, after giving another $1 million to the Republican Governors Association this summer. The US Chamber of Commerce is a business advocacy group. They’re made up of the rich. So News Corp is giving money to the rich—the same thing they think that the tax system is designed to do. There should be a law against this. And these donations from News Corp are designed to make sure there never will be.
Today’s Homework Discuss
As the death toll climbs, Ellen DeGeneres made an emotional plea to put an end to teenage bullying: