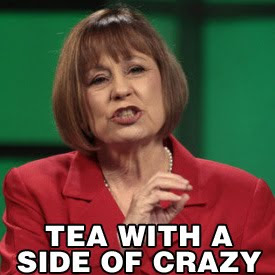 I’m sure Harry Reid was annoyed at having to debate somebody like Sharron Angle. But he should keep in mind that running against somebody like Sharron Angle is the only thing that gives him a chance. And we’re all glad that we got through that debate without having Sharron Angle resort to any “2nd Amendment remedies."
Whoopi Goldberg and Joy Behar both walked out on Bill O’Reilly when he appeared on “The View” yesterday. The walkout came after a heated exchange in which O’Reilly said “Muslims killed us on 9/11.” Yes, the people who perpetrated 9/11 were all Muslims. They were also all men. Does that mean that there should be no men’s clubs near Ground Zero? Because that’s what’s there now. Honestly, can anyone be surprised when Bill O’Reilly says something disgusting? It’s like being shocked after you open an email from Carl Paladino.
Speaking of which… The extreme pornographic and racist emails that Carl Paladino sent around to his buddies have resurfaced. Is this the kind of person New Yorkers want in Albany? I don’t want to have to put the Governor of New York on a “blocked senders” list. Just this week Carl Paladino said “we must stop pandering to the pornographers and the perverts who seek to target our children and destroy their lives.” The first thing we have to do to protect children is make sure they’re not Facebook friends with Carl Paladino. Sometimes when he sent out the emails Paladino included comments like “awesome.” I guess when you’re commenting on pornography, you want to avoid the phrase “two thumbs up.” People might think it’s a literal description.
Today’s Homework Discuss
Joy Behar on walking off The View over Bill O’Reilly and Jesse Ventura on the Fox News ‘Three Stooges’...