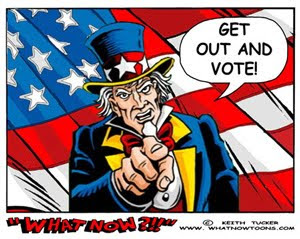 HOUR THREE GUEST: Gov. Tim Kaine, Chairman of the Democratic National Committee.
It’s Election Day! Though if you like, you can think of it as one final poll… with 100 percent accuracy. I like to think of it as the night of the much anticipated “Chuck Todd TV Spectacular.” Election Day is a day that people all over America eagerly look forward to… if only because it means that they’ll finally stop seeing that avalanche of political ads on TV.
What’s at stake? Republicans are vowing “no compromise” for the next two years if they win the House or Senate. If Republicans are in charge, Congress won’t address the problems facing America, Congress will just become another one of the problems facing America. The Republicans will go from obstructionism to outright destructionism. There are plenty of important races. You might want to keep your eye on Alaska tonight. Actually, since they have to count write-in votes, you might want to keep your eye on Alaska for the next several weeks. And after tonight, we might have the very first member of Congress who enjoys dressing up as a Nazi… at least the first who does it in public. I have no idea what Tom DeLay liked to do in front of mirrors behind closed doors.
What impact will the Tea Party have? Tonight this Tea Party could end up being one of those parties that goes on into the wee hours, keeping everybody up all night. 138 candidates for the House and Senate claim support from the Tea Party movement. If they all go to Washington, there are going to be a lot of little towns all across America who will be missing their village idiot. Well, if the Tea Party candidates get elected and start writing laws, I at least hope that they’ll start checking their spelling a little bit better. I don’t want Tea Party politicians in Washington sponsoring “lejislayshun.”
We’ve already seen what happens when rightwing principles are put into action, with that poor guy whose house burned down because he didn’t pay his $75. The bottom line is this—if Republicans are in charge and America catches fire, nobody is going to put it out. You can help prevent that fire. Get out and vote today.
Today’s Homework Discuss


Thom's blog
Who's screwed if the Republicans take control of Congress?
Who's screwed if the Republicans take control of Congress? Labor unions, that's who. Well, I guess you can argue we all might be...but organized labor - the last big funder of Democrats left standing - feels they will surely become public enemy number one in a Republican controlled Congress. On the agenda will be two anti-union pieces of legislation dealing with "card check" and limits on election spending - yes, the Republicans will consider pushing legislation limiting election spending by unions, can you spell hypocrisy? While Democrats failed to pass organized labor's top priority "card check" bill that allows for easier organization in the workplace through potential members simply by signing pro-union cards, Republicans will be sure to pass legislation of their own ensuring that card check never comes to fruition. In other words, they want to make it easier for your boss to intimidate you and squash any organizing attempts. And, to ensure they hold the upper hand in future election spending, Republicans will forbid unions from using members' dues for electioneering unless the individual members provide their consent. Yet Republicans are adamantly opposed to limiting corporate election spending without a vote of shareholders. Unions were able to provide a meager balance in their financial support for Democrats this election cycle, but still paled in comparison to the avalanche of money thrown at Republican candidates by unknown billionaires through the Chamber of Commerce.

http://ThomHartmann.com
(Who do you think is screwed if the Republicans take control of Congress? Tell us here.)
Posted by Stacy Burke at 11:48 AM