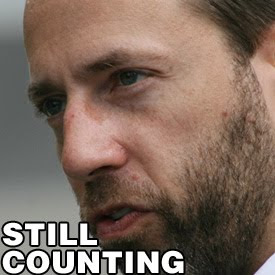 The fallout from last week’s election keeps falling out. In Alaska, it’s still Lisa Murkowski versus Joe Miller. It’s kind of like the recount in Florida in 2000, except that nothing good can come out of it. Lisa Murkowski is trying to be the first write-in candidate elected to the US Senate since Strom Thurmond in 1954. Odd that Republicans oppose funding for education, then need to rely on people’s correct spelling to win. Joe Miller has sued to force election officials to allow no leeway whatever in terms of misspellings on the write-in ballots. It sounds to me that Joe Miller is trying to disenfranchise bad spellers. I got news for you, Joe—if it came down to it, most of your supporters couldn’t spell “Miller.” Heck, a lot of them would have trouble with “Joe.” Incidentally, the ballot counting will be streamed live on the internet… for those of you who don’t know what to do with yourselves since the BP oil spill-cam shut down. The most expensive Congressional campaign this year on a per-vote basis was Sharron Angle’s campaign. They spent $97 per vote, and they lost. How can you spend $97 per vote and not beat a politician as unpopular as Harry Reid? At $97 per vote, a ham sandwich would have beaten Harry Reid. Hell, at $97 per vote, you should be able to get a whitefish-with-capers sandwich elected, even if the whitefish is starting to smell a little funky. South Carolina electoral oddity Alvin Greene is mulling a run for President. Hey, if he’s looking for a running mate, somebody give him the email address for Basil Marceaux. Finally, Kanye West has apologized to George Bush (video below) for saying “George Bush doesn’t care about black people.” Well, West’s original statement was correct, but it was misleading. He should have noted that George Bush doesn’t care about most white people either. Kanye apologized by saying “we as human beings don’t always choose the right words.” Kanye, if you’re saying that to George Bush, you’re preaching to the choir.
Today’s Homework Discuss

Thom's blog
Why Does a Cashed Strapped Mother Sell her Baby?
You need to know this about our nation's grim labor market. In Florida - a cash strapped mother of a newborn tried to sell her baby for $30,000 to pay off legal bills and buy a new car. Luckily the person she tried to make the sale to was an undercover cop and she was arrested. This case highlights a disturbing situation in our country though. Welcome to America - the home of a desperate underclass with no hope of finding a job. According to a new study by the Bureau of Labor and Statistics - there were 2.9 million available jobs in September - unfortunately there were nearly 15 million people unemployed. That means there is only 1 job available for every 5 people looking. Yet Reuters is reporting that companies have plenty of money to start hiring - with over $1 trillion dollars in cash on hand - they just aren't doing it. That's because the Chamber of Commerce and their allies in the Republican Party continue to promote job outsourcing. Thanks to Republicans, if you want a good American job? Move to India.
-Thom
(How do you think jobs can come back to the USA? Tell us here.)
Posted by Stacy Burke at 6:43 PM