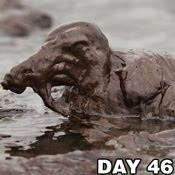 It's Friday, ya bastids!
A cap has been lowered onto the sheared well pipe in the Gulf and we should know soon if the endeavor to “Cut & Cap” has been successful. Remember, this is not a fix, it’s just a stop gap to siphon off at least some of the gushing oil until a successful relief well is completed (August at best) – a stop gap that could net BP $1.4 million a day in oil revenues, by the way.
Meanwhile, the pictures of crude-coated wildlife are simply heartbreaking ( video). Oil sheen and tar balls have been reported in the Florida Keys. Oil-soaked vegetation has begun washing ashore in Pensacola . And a new computer modeling study demonstrates how the oil could climb all the way up the East Coast. Louisiana Gov. Bobby Jindal lays into BP’s CEO, but on the same day tells Obama to drill, baby, drill – the White House was not impressed. If fact, new drilling permits issued this week have been rescinded. Obama has spent the day in Louisiana meeting with locals and he was on last night’s Larry King Live. In that interview, the president said that a hurricane hitting the spill might, ironically, be a good thing. Maybe, maybe not.On the immigration front, Arizona ’s governor Jan Brewer cools her tough talk after meeting with Obama.
And as we told you yesterday on the show, the FBI reports that the US/Mexico border and border cities are among the safest places in America .The jobs report for May is somewhat discouraging… while 431,000 jobs were added, 411,000 of them belong to temporary Census workers. But even for those with jobs, life is getting harder and harder. The last couple of decades have seen the ultra-rich wildly benefiting at the expense of the average wage slave, and for 1 in 4 Americans the paid vacation is a thing of the past.
Also, Rush Limbaugh will be wed for the fourth time this weekend. McDonald’s recalls 12 million toxic Shrek glasses. Detroit Tigers pitcher Armando Galarraga gets a Corvette as a consolation prize for being robbed of his perfect game. A South Carolina state senator plays the “raghead card” (geez!). Mixed-race marriages are on the rise. Golden Girl Rue McClanahan has died of a brain hemorrhage at 76. And something to look forward to: happiness comes with age.Have a great weekend!

For more Randi content, be sure to check out her Daily Homework
Click to listen to today's audio comedy bit!
Posted by Stacy Burke at 7:41 PM